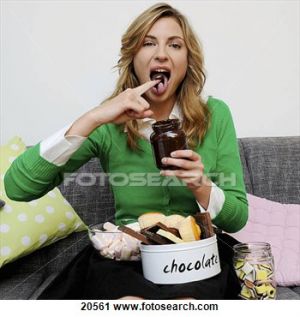 Eating Disorder, abnormal behavior patterns with regard to food, not including simple overindulgence and resulting obesity. Two serious eating disorders are anorexia nervosa and bulimia.

Anorexia Nervosa, mental illness in which a person has an intense fear of gaining weight and a distorted perception of their weight and body shape. People with this illness believe themselves to be fat even when their weight is so low that their health is in danger. A person with anorexia nervosa severely restricts food intake and usually becomes extremely thin.

Bulimia, an eating disorder in which persistent overconcern with body weight and shape leads to repeated episodes of binging (consuming large amounts of food in a short time) associated with induced vomiting, use of laxatives, fasting, and/or excessive exercise to control weight. Bulimia was classified as a distinct disorder by the American Psychiatric Association in 1980; the name was changed to bulimia nervosa in 1987.

Sometimes bulimic behavior is observed in cases of anorexia nervosa, or abnormal dieting, but bulimia in itself does not result in severe weight loss. It can, however, cause gastrointestinal problems and serious potassium depletion, and teeth may be damaged due to the acid nature of the regurgitated food. Bulimia usually develops during adolescence (most commonly among females) as a result of various psychological pressures, the most obvious one being the social emphasis on the desirability of slimness. Various modes of group and behavioral therapy are used in treating the disorder. Because patients with bulimia often suffer from depression as well, antidepressant drugs may be effective.